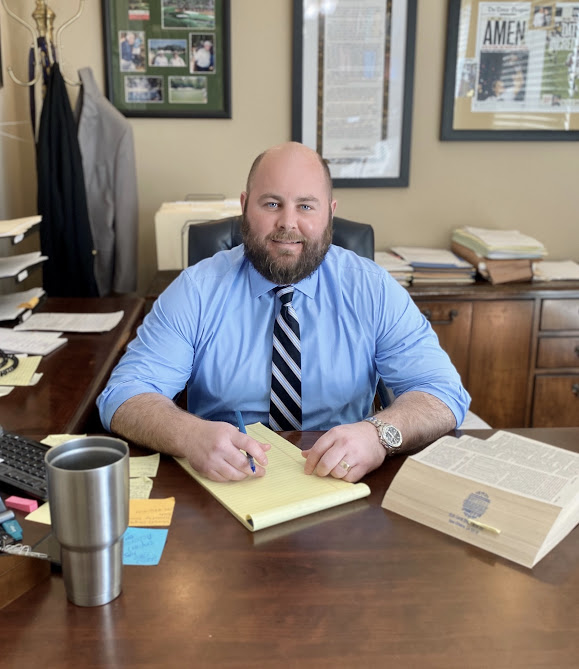 Attorney George McGregor in the Spotlight…

New Orleans Criminal Defense Attorney George McGregor, also known as “G,” is a true New Orleanian native. He was born and raised in New Orleans and graduated from Jesuit High School. For his Bachelor’s Degree, he stayed close to home where he graduated from LSU with a degree in History. Right after, he moved back to New Orleans where he received his Juris Doctor from Loyola University College of Law. He continues to call New Orleans home where he resides with his wife and soon to be born baby boy or girl.

Since joining Burgos and Associates in 2014, G represents people facing all kinds of criminal charges at the state and federal level in our community, which encompasses all the New Orleans metro area. His clientele includes those who have been arrested for everything from traffic tickets to DUI/DWI, to drug possession and distribution, and violent crimes. He also has a large personal injury clientele. G advocates for all of his clients, whether that means standing up for their rights in court or negotiating a settlement.

In recognition of the high quality of legal representation provided to his clients, G has been repeatedly recognized as a rising star in both criminal defense and plaintiff’s personal injury

We sat down with G to ask about his life and experience as a Criminal Defense attorney in New Orleans.

1. What do you enjoy most about being part of Burgos and Associates?

The team environment combined with the laid back atmosphere.

2. What advice do you have for clients looking for a criminal defense lawyer in New Orleans?

Don’t hold back any details from your attorney. I get it. It’s not pleasant to talk about the allegations against you and it’s probably embarrassing. The thing is, I’ve probably heard some variation of these allegations before. More importantly, I can’t defend you from things I don’t know about.

3. What has been one of the greatest challenges you’ve faced as a lawyer?

Learning the practice of law is far more than practicing law. It’s that, plus: acting as a counselor to clients, managing litigation costs, managing a business, and running a marketing firm, among other things.

4. Tell us about a case that you’ve handled that you consider a success story.

There’s so many different successes. It’s easy to point to the big money wins or getting false rape allegations dismissed – and trust me those were successes for not only me but also the clients. But there’s also the far more common smaller success such as making sure someone doesn’t end up with a felony on his record or getting someone his driver’s license back after it’s been suspended for years. All are great.

5. Have you always been a criminal defense lawyer?

No. I actually worked for the DA’s Office in law school as a student practitioner. After law school, I started a career in insurance defense. After three years, I saw the light and jumped the aisle to begin representing people as opposed to institutions.

I don’t have a typical day. A lot of days start off in the court room. Others start at jail. Others on the road to a courthouse in some other parish – be it Down the Bayou or all the way to Lafayette. Occasionally, my day starts in the office.

7. After being arrested in New Orleans, what is the first thing you should do?

March in the Irish Channel St. Paddy’s Day Parade, ride with the Krewe of Carrollton, drink too much, eat too much, talk too much Saints news, talk too loud, swear too much, cook too much, etc.

Tl;dr – just being a New Orleanian.

9. Who has been the biggest influence on your legal career?

Impossible to say a single person. But the three people I’ve worked for have given some great advice that’s stuck with me.

An attorney I worked for at the DA’s office told me: “The legal profession is the only one where plagiarism is not only allowed but encouraged. If you see something that works, use it.”

The guy I worked for doing insurance defense liked to remind me: “This ain’t rocket science. Commit to learning the job, do the job well, and you’ll do better than 1/2 the lawyers out there.

Another learned attorney (Cesar) likes to remind me: “Everyone had something you should learn and put in your repertoire. They also have habits you should learn to avoid. Pick up the right ones.”

Those three pieces of advice have probably been the most influential.

10. What is great about working in New Orleans?

11. What are one or two things about you that most people don’t know?

I studied Latin Dance at LSU and I can do a split.

12. What three words best describe you?

If you have been arrested for DUI, drug possession, domestic violence, or any other crime in the New Orleans metro area, you want to be represented by an experienced criminal lawyer who will make your case.